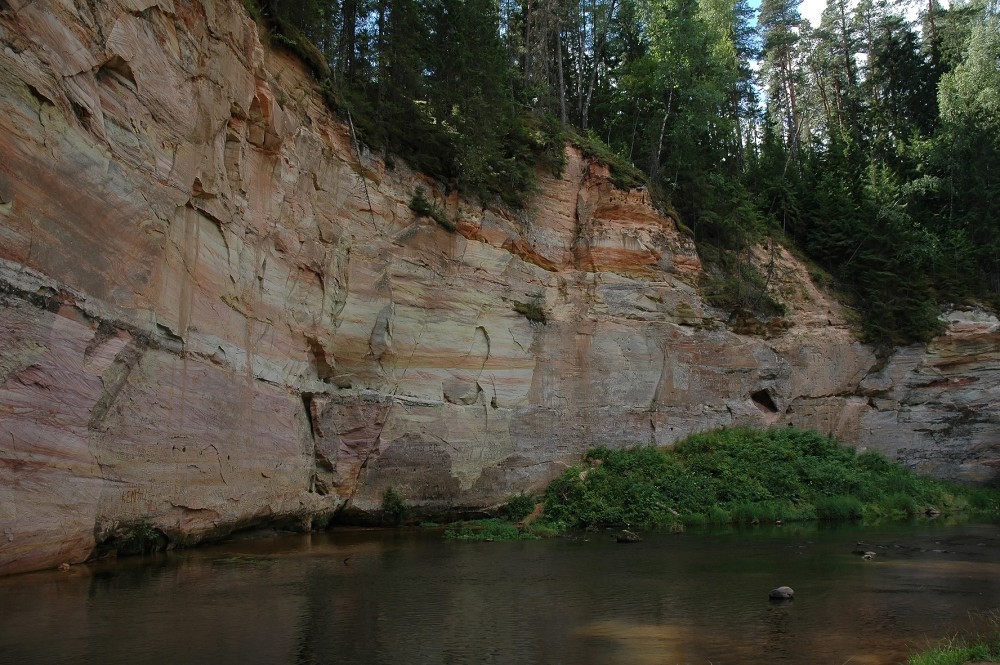 One of the most beautiful natural sights of Estonia is Big Taevaskoja. Its outcrop rises from the river surface to 22.5 meters; the relative height of the valley brink is up to 38 meters.

Just a few decades ago people liked to engrave their names in this large sand wall. Some names have been preserved there ever since. Most of them, however, have been washed off by water.

On the edge of the rapids, slightly upstream from Big Taevaskoja, is a large boulder called Witch Rock aka, a Sky Rock. According to a legend, an enemy spy hid behind it who had sneaked to eavesdrop on the discussion of the community elders. 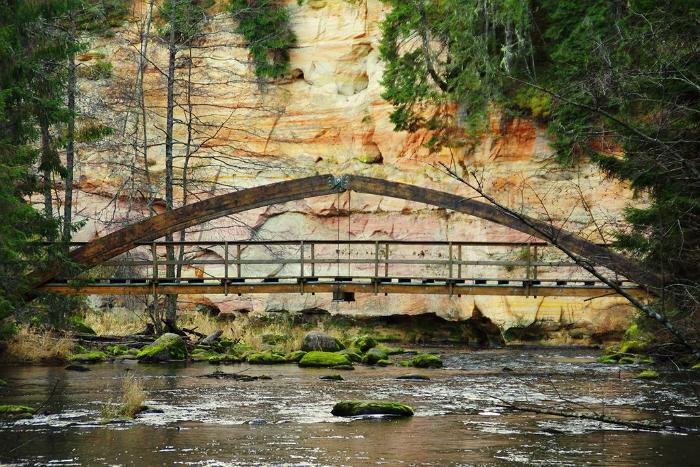 The outcrop reaches a height of 13 meters. Historians believe that the sandstone walls were called Taevaskoja (Celestial Chamber) most likely because the Taaraist Estonians held their meetings there.

Legend tells us, however, that the Devil was enchanted by the beauty of the place so much that he built a myriad of underground nice rooms and called them Celestial Chambers.

Next to the Taevaskoja outcrops flows the Ahja River, one of the today’s most popular places for canoe and kayak trips. 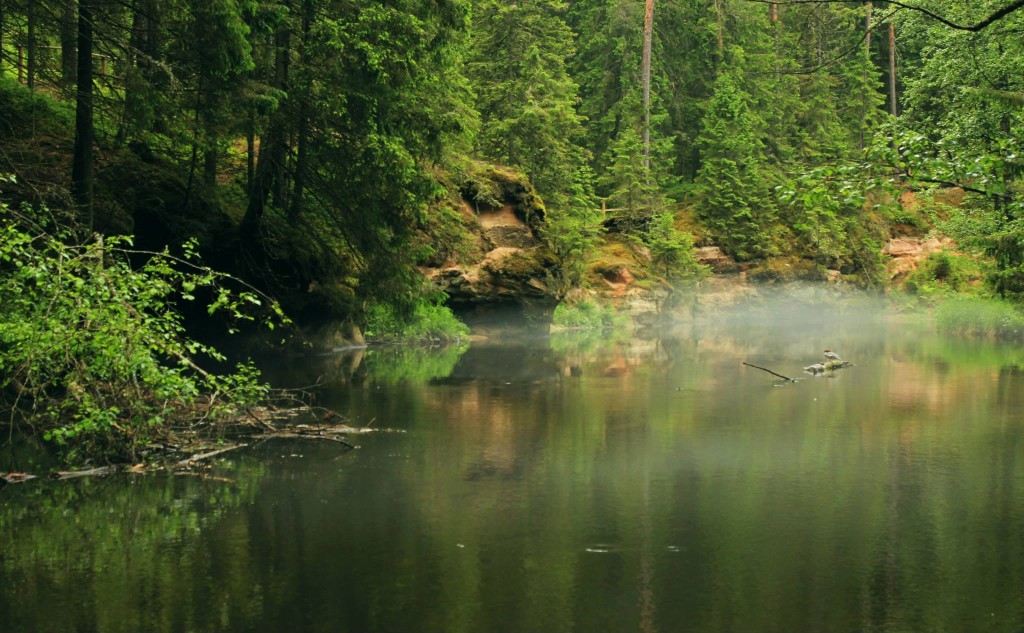 Big and Small Taevaskoja are located in the Ahja Primordial Valley. It is an approximately 19 kilometers long section, where there is a total of 43 sand outcrops. The Ahjan River Primordial Valley Landscape Protection Area is one of the oldest landscape protection areas in Estonia.

In this stretch of protected area, the relief of the Ahla Primordial Valley is most diverse, and the scenery is the most beautiful. On one hand, is the sediment sandstone that has been created over hundreds of millions of years, on the other hand, is the background of dark coniferous forests. This all affects a person so emotionally that already in ancient times this place had a reputation of a temple.

The hiking trails of the Ahjan River Primordial Valley run in the area of Kiidjärve and Taevaskoja on either river bank, meandering in deep valleys as well as in sand outcrops. 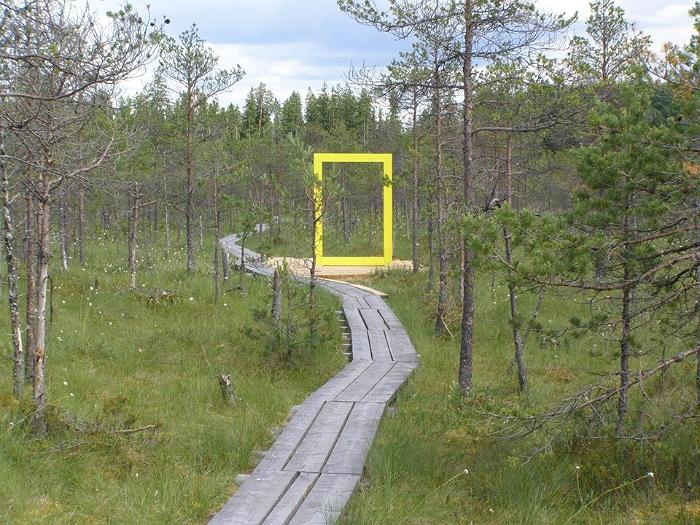 Some time ago on this trail was placed one of the famous windows of National Geographic. In addition, it is an exciting and varied circular route. En route, you can see poor fens or bogs, fertile virgin forests and bog pine forests.

The bog is a favorite place for wild boar and elk. Here and there one sees the giant anthills, mud baths of wild pigs and apartment buildings of woodpeckers. With some good luck, on some turf you can find a scratch of a bear’s paw. 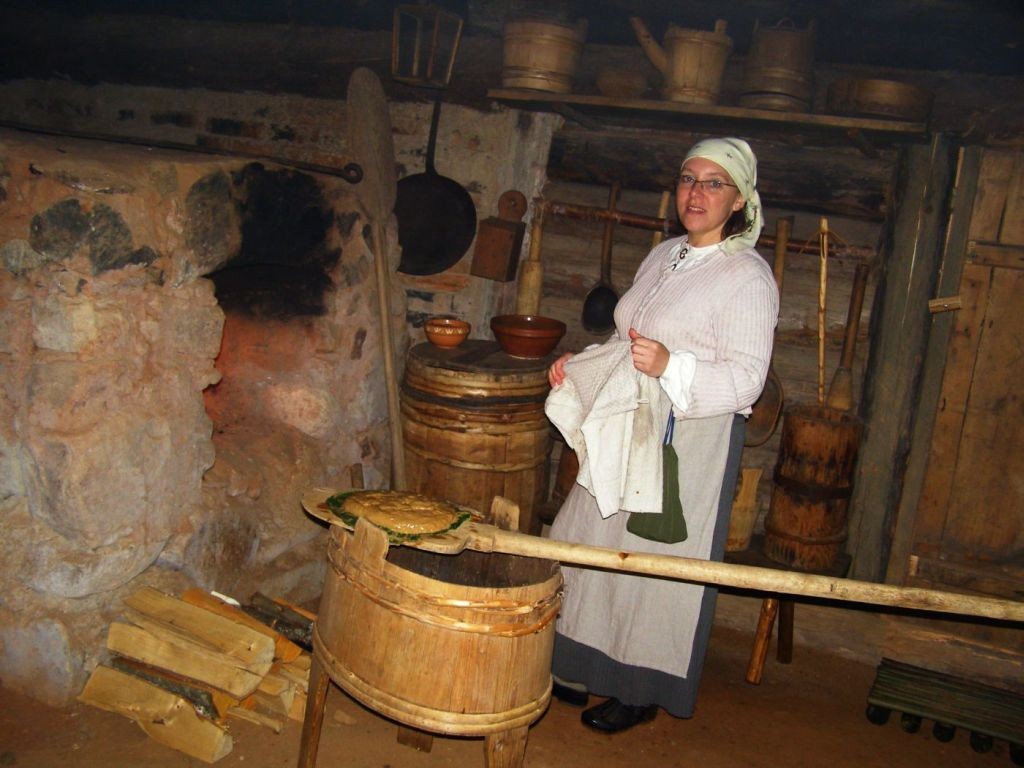 The museum was founded in 1971 by Kalju Kermas. In his heart, he had been harboring the idea of establishing the museum for years, looking for a suitable place for it. This place, Karilatsi Schoolhouse was proposed by life itself – the school was closed in the spring of 1972 – and the buildings were in a good condition and the plot of land became available.

Another idea that the founder of the museum Kalju Kermas was harboring was to build the museum as a joint project of the schools and students of the district in order for “every young person to have a sense of community and know their place in life. And this is exactly what happened. In total, the volunteer work performed on the establishing of the museum in those years was 42,632 hours (34,115 of them by the students of the local school). Thus, we can say that the Karilatsi Museum was built by the hands of the local schoolchildren.

Today, Põlva Peasant Museum is a unique open-air museum in Southern Estonia. In our 5-hectare area, one can access the parish center, school farm, Punaku farm and a barn dwelling of the former Karilatsi (Kähri) parish from the last decades of the 19th century and early 20th-century. In addition, the museum has a natural model of Põlva County, a Dutch-style windmill, a shed of beehives, steam engines and threshing machines with a variety of farm tools. 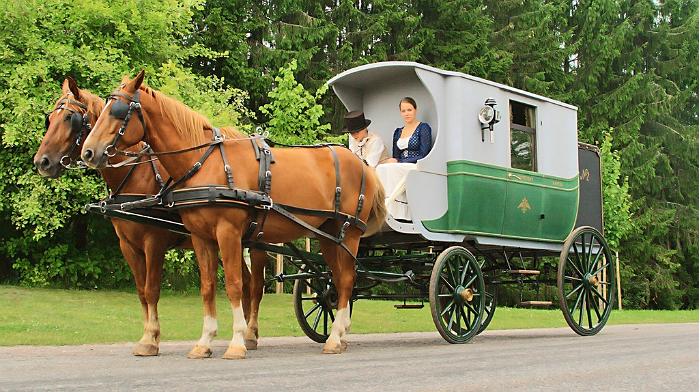 The Road Museum is a groundbreaking exhibition environment in the open air, an unexpected architecture in the Southern Estonian landscape, a road unrolled in time and space, where are moving the outdated and the future means of transport.

Entering the unique exhibition environment one can see traffic signs, which can no longer be seen on today’s roads. cross-sections of the road pavement give a glimpse into the secrets of the road construction. A decent place for exposure has been found for the Estonia’s oldest steel highway bridge named Vati. Anyone who wants can examine large road construction and maintenance machinery directly in their natural working environment.

The sections of road originating from locations of Estonia and Livonia are located in cavities passing along which one can experience the flavor of different eras. Walking through the ages begins with a swamp road and ends with asphalt. Along the roads one can see environments of the past, in addition to other interesting stuff, one can gaze at historical vehicles. The quest is accompanied by graphic concrete images used in Estonia for the first time. 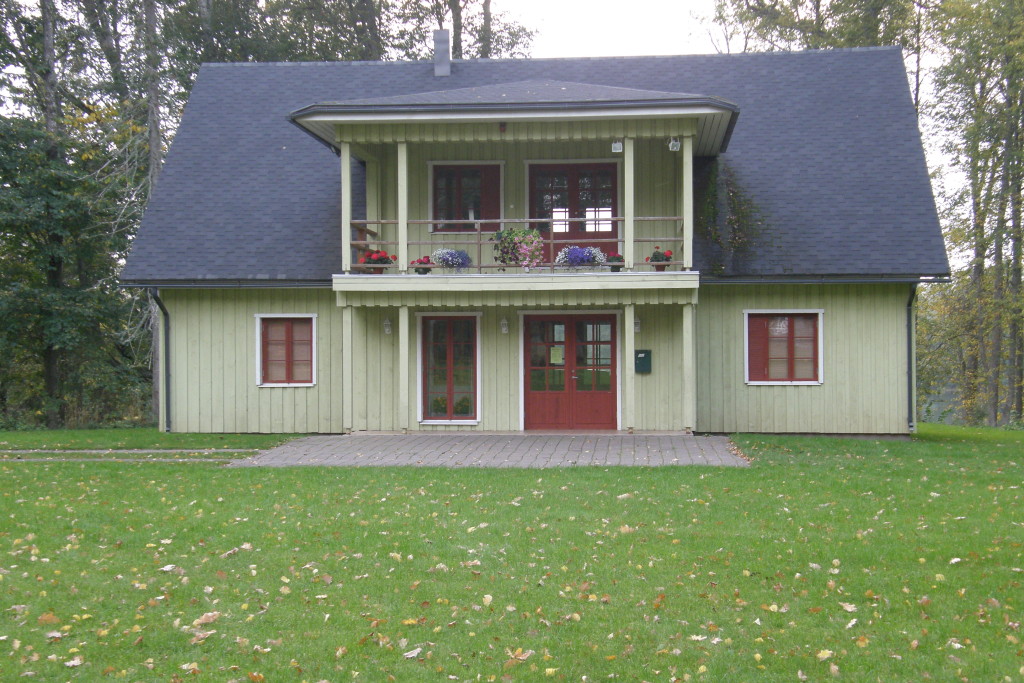 Initial reports of Kiidjärve Manor date from the late 17th century, when the Manor belonged to the family von Zöges. In 1726, the manor was separated from Vana-Kuuste Manor, the new owner was H. von Schlippenbach. The current name was introduced in the 18th century.

The park was probably founded in the second half of the 18th century, at the same time with buildings of the heart of the estate. The boundaries of the part of a rectangular shape are marked from three sides by rows of old majestic oaks. Partially has been preserved the geometrical road network and the internal spatial distribution of the park.

The size of the elongated Lake Kiidjärve is 13.8 hectares, on the south-eastern shore of the lake, in the northwest corner of the park, is a sandy swimming area. In the park is a bonfire site for villagers and a huge swing.